Friday The 13th & A Nightmare On Elm Street Killer Trivia 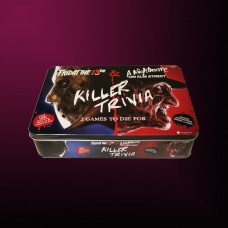 *This game is open and has been used, all pieces and instructions are included,

The bloodbath continues,but now it's your turn to slay Jason Voorhees and Freddy Krueger,the most iconic cinematic serial killers of our time,have nothing on you.Recount your knowledge of all ten "Friday the 13th" films,seven "A Nightmare on Elm Street" films,and only "Freddy vs. Jason" film in an effort to collect corpses and accumulate enough bodies to win.

With over 1,000 questions,a custom die,coroner's reports that challenge you to recount the gruesome ways that Freddy and Jason slaughtered their victims,this trivia game is sure to provide frightening fun for all horror film fans.